A final trip before my son joins the Air Force.

It has been too long since I have really spent any time in the back country! I rediscovered another blogger that I admire and her recent post about Reflection Canyon. That post can be found here: http://www.girlonahike.com/2017/04/backpacking-to-reflection-canyon.html. After seeing her post, I had to go shoot it! I have been exploring portrait photography for long enough now that my soul ached to capture something epic!

I had planned on going alone, a few weeks earlier, however my son decided he wanted to go. We made our plan to leave on a Friday, however a work emergency changed that, so Saturday was our next option. The planned Saturday arrived and of course we left later than desired and began the very long drive to Escalante Utah. Escalante isn't on the way to anywhere, it's a place you have to want to go to. You'll spend at least have the time on a two lane highway.

Once we made it to Escalante, we loaded up on a few snacks and headed farther south down Hole in the rock road. This is the infamous, brutally wash boarded in some areas, road that takes forever to drive. It was eight pm when we finally reached the trail head. Too dark to hike an unfamiliar desert at night with just head lamps you say? You're absolutely right, I highly discourage any sane and pain hating person from hiking anywhere in the dark. However, pain is my constant companion as of late and as my wife can attest, sanity is something I have in short supply!

We slung our packs, donned our head lamps and located the trail to began the trek. There is a trail and we lost it quite a few times, but not for long. I do not recommend wearing shorts on this trail due to the sage brush and cacti that dominate the landscape. It seamed the sage brush did not want us there and took their best shots to punish us if we walked by too close. I ended up with quite a few nasty scratches over the eight miles. Despite the drawn blood and the occasional rock trying its best to trip us, we made it to the canyon. It was about two am when the tent was set up and I was out immediately the moment I entered my bag. I never take an alarm clock because no matter how much high tech, ultra gear I by, i never sleep well in the back country, so an alarm clock isn't needed. I did, however manage a solid three and a half hours that night. I awoke at about five forty five and went looking for my shot. I love all of the other photographs I have seen of this place, but I needed my version and after about a half hour of walking around I settled on a spot. I took about thirty shots total trying to mange the look in camera, because over the few years I have been shooting, I have discovered that in order to get an epic processed photo. It has to be perfect in camera! 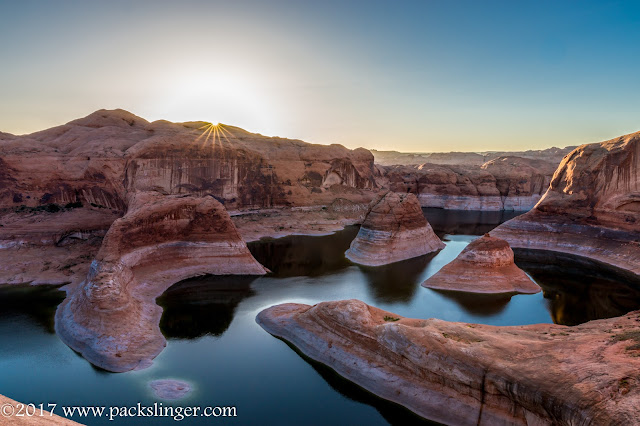 Here is the final imaged and just as the sun crested the far ridge. This is why I punish my body, so when I'm old and feeble, I'll have thousands of memories to look back on! 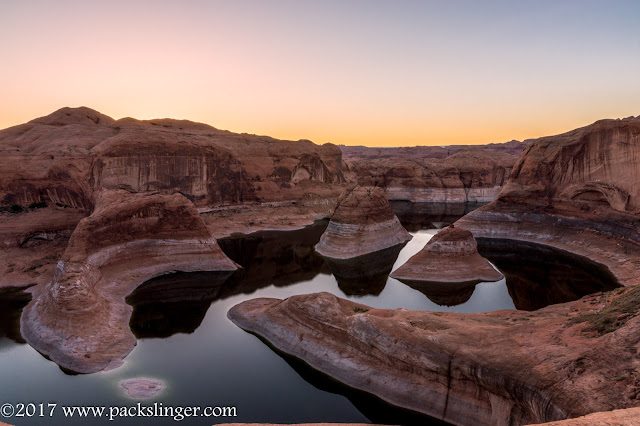 Sheer awe is how I felt at the moment I took this photo! The brilliant colors in the rock, along with the yellow light rising from the east, warmed my soul! The air had a slight, pleasant chill as I sat and waited for the sun to make itself known. It had been a warm night and despite the scratches and dried blood on my legs, I was really glad we hiked in late that night. I wasn't looking forward to the sun beating down on us the eight miles out.

Once the sun rose, I took a few additional shots, just to play around with some lens flares! Hollywood seems to be all about them as of late! 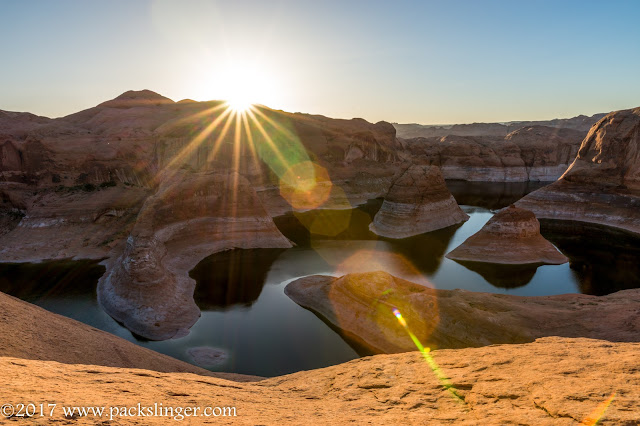 At this point, the sun was generously putting out the heat and I needed coffee! So back to camp I ambled. I made coffee and we packed up camp so we could start our long journey back to the truck. 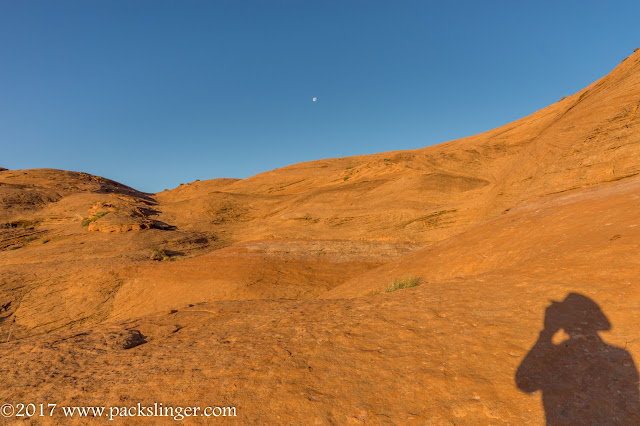 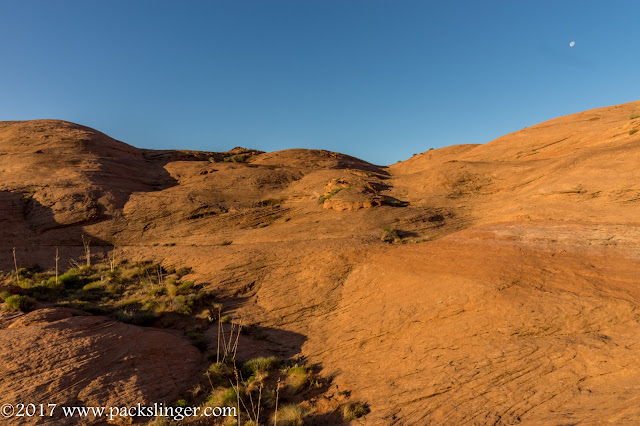 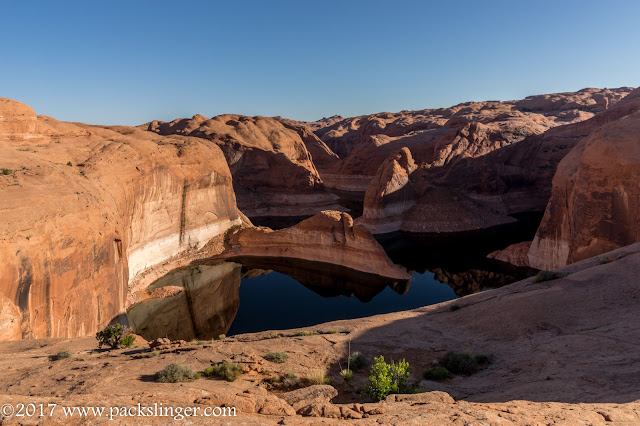 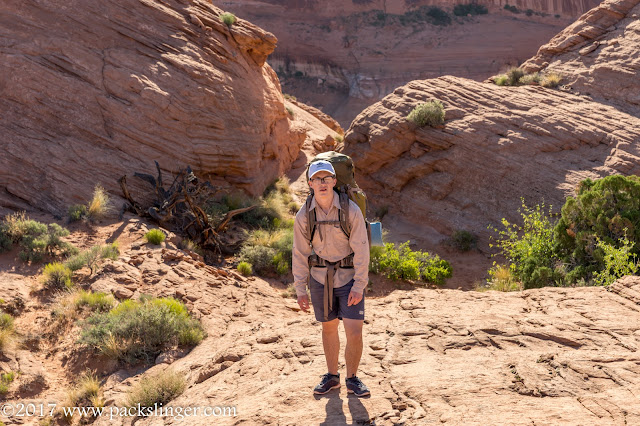 My son, most likely thinking he was crazy for wanting to tag along with his insane father! 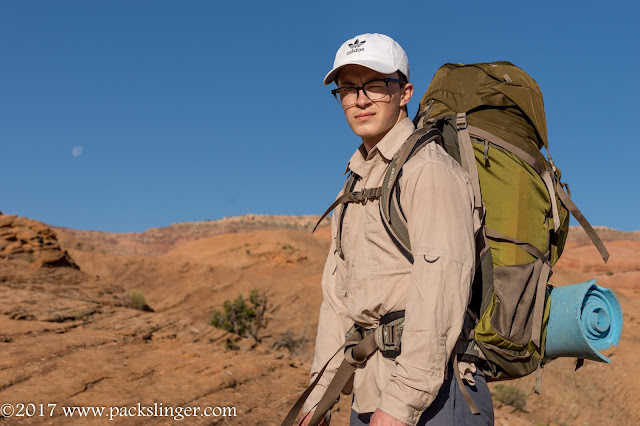 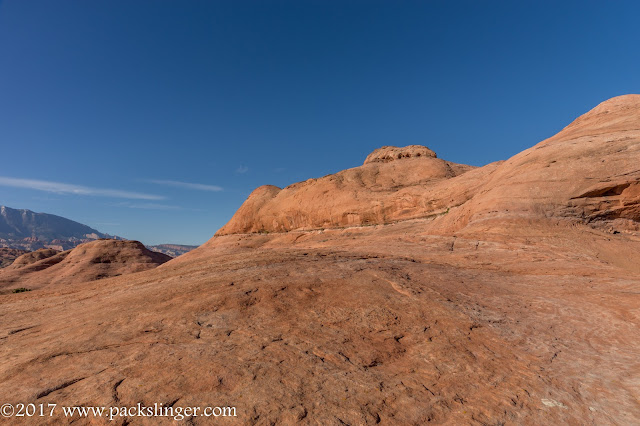 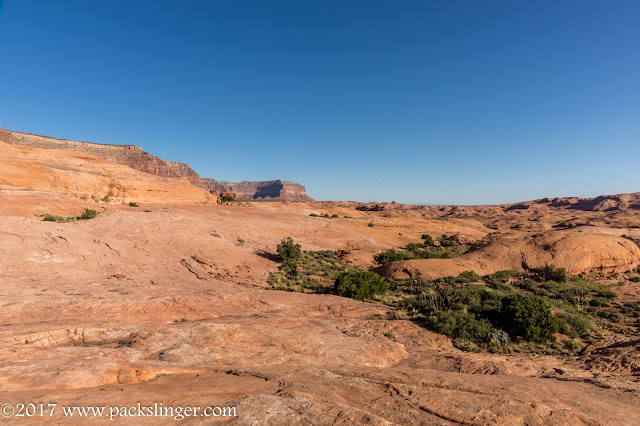 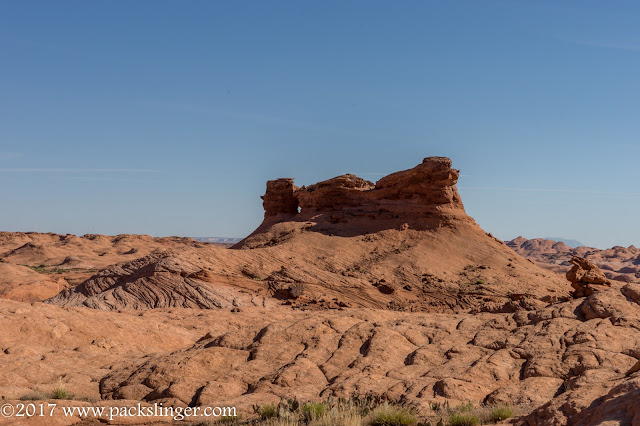 After a few miles of hard sand stone, we were back to the soft sandy trail, the scenery is quite different in the daytime and thankfully the wind kept us cool. The wind stayed at our back nearly the whole way. At about the half way point, utter exhaustion began to creep its way over me and short of one beautiful flower, my camera stayed put away! 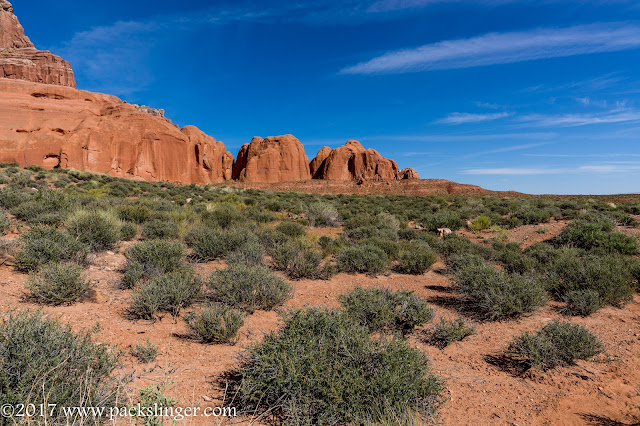 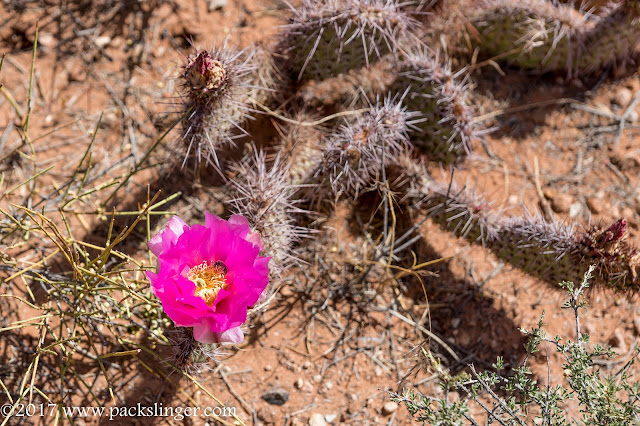 It took a little over four hours to hike the eight miles and I was feeling the extra 12 lbs of camera gear and serious amounts of water necessary to hike in this heat. We made it back with a couple liters left over. My recommendation in to go in April or the fall for the best experience, unless of course you have pack mules to carry the water needed!

Now, go have an adventure!